I had heard about Martians from the TV show, My Favourite Martian. The main character lived with a human who spent all his waking life trying to hide the Martian’s existence from others. Although I thought the show was funny, I didn’t quite understand why this level of anonymity was necessary — until I went to school. Read more HERE.

“Tampon tax” to stay: Despite a colourful and sustained media campaign that drew international notice, a 100,000 strong petition, and a commitment from Federal Treasurer Joe Hockey, GST reform on tampons has been rejected by NSW and WA. Michelle Pini reports. Read More HERE.

Abbott’s overreach on ABC could cost him votes 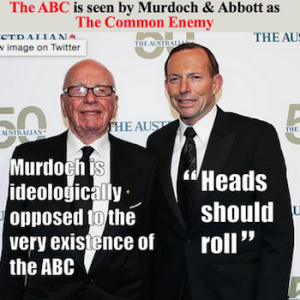 Abbott’s blatant overreach in issuing an ultimatum that Q&A come under control of ABC news is having repercussions even from blue ribbon liberal supporters. It has also provided an unexpected platform for the Friends of the ABC, reports Michelle Pini. Read More Here.

Australia’s complacency in the face of worldwide bee decline

Bee decline is now a global problem with up to 90 per cent of our crops at risk. Research showing the chemical neonicotinoids (NNIs) as the main culprit has led to its ban in Europe with USA also resolved to take action. But, here in Australia, there is no ban nor even an investigation. Read more HERE.

Right in the line of fire

Earlier this year fire destroyed three Warrandyte properties and almost swept through the township. While we realise how invaluable our brave firies and emergency services are, there’s a lot going on behind the scenes. The Diary’s MICHELLE PINI caught up with key players including chief fire commissioner Craig Lapsley. Read more HERE.

Mary toys with a perfectly proportioned quarter of meat pie on her plate. “I can’t eat any more, would you like some pie?” she asks Campbell. “No thanks Mum,” he replies. She is determined not to waste the gourmet scrap and turns to her granddaughter seated next to Campbell. “What about you?”